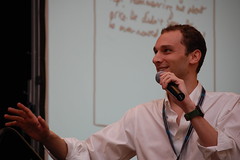 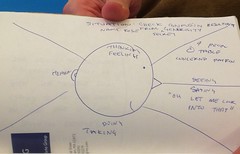 David Yanofsky, an interactive designer at Bloomberg News, presenting his ‘problem-solving’ map in front of the audience. Brave man!

We’re having technical difficulties with Storify today, which is how this reporter was preparing to tell the story. Check back later for an update with robust social media!

Dave Gray, founder of XPLANE, ran Saturday’s afternoon keynote as an instructive exercise about what he calls ‘gamestorming’ and creative group brainstorming techniques. By this, he says, the name of the game is to find ways to structure and organize your meetings to assist with the outcome.

“We have an innovation problem,” Gray said, pointing both to the fate of Nokia in the newly smartphone-dominated world, and to that of newspapers. “There’s no guaranteed business process to get you an iPhone, if you’re Nokia, but you have to involve creative and business people in the creative process.”

Journalists are most comfortable with linear processes, in which a predictable input leads to predictable output. Gamestorming is a non-linear process; the input is known, but, Gray said, “the output is, to quote Donald Rumsfeld, ‘a known unknown.’ We don’t know what we don’t know.”

Rather than have a predictable meeting in which everyone ends up looking at their phones, or a storm of disorganized sticky notes with ideas. “If you have in mind what kind of outcome you want,” Gray offers, “you can structure the game — the meeting — to have that outcome.” A meeting in which you seek consensus would be structured very differently from a meeting to get lots of creative ideas.

After asking the audience to go through the process of creative brainstorming and empathy themselves (see photo above), Gray closed with what he referred to as the “paradox of discovery”:

View all posts by Wes Meltzer →